Watch a performance of the Ballade – 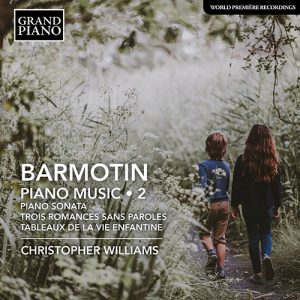 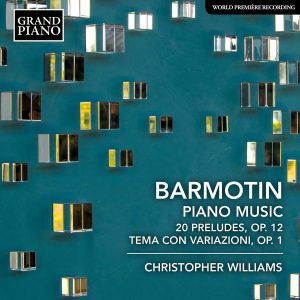 “This music requires advocacy such as it finds in Christopher Williams, probing its personality as surely as its technical mastery, his Steinway D accorded sound of realism and perspective…these premiere recordings of Barmotin are certainly worth investigating.”
Gramophone

Semyon Alexeyevich Barmotin (1877–1939) was a student of Balakirev and Rimsky-Korsakov, and his fate under the Soviet regime in the 1930s remains a mystery, but what survives of his music is impressive in both scale and content. These world première recordings are filled with colour and contrast: the Tema con variazioni transforms its material into a multitude of moods to conclude in a symphonic march, while the 20 Preludes are striking in their sophisticated harmonies and heightened emotional impact.

Born in Wales, Christopher Williams is a music graduate of Cardiff University and now leads a busy and varied professional life as a pianist, composer, conductor, teacher and arranger. He is currently assistant director of the BBC National Chorus of Wales and is a pianist for the BBC National Orchestra of Wales, with whom he has performed at the BBC Proms and recorded for the Chandos and Hyperion labels. A staff accompanist at the Royal Welsh College of Music and Drama since 1997, Christopher has taught piano at Cardiff University since 2001 where his own teachers included Richard McMahon, Simon Shewring and Martin Jones.

Influenced by his first teacher and mentor, Walter Ryan, Christopher developed a keen interest in the study and performance of works by undeservedly neglected composers and has since gone on to perform the rarely-heard piano concertos of Carl Reineke and Anton Rubinstein.

He regularly appears on BBC TV, most recently as an official accompanist for BBC Young Musician of the Year 2020, and been broadcast on BBC Radio, Radio Luxembourg and NDR.

During the 2020 covid19 shutdown he is composing a series of pieces, one for each brass instrument, for students at the Royal Welsh College of Music and Drama.
Already completed-
Chaos is a Ladder (Trombone and piano)
Song of the Narrow Sea (Trumpet/flugel/cornet and piano)

His piece – XX Mountains of Abstract Thought (trumpet and piano) has been broadcast on Lyric FM and was recorded by Huw Morgan on the Naxos Label.

His recording of Brahms transcriptions for Naxos’ Grand Piano label, released in October 2017, was featured as CD of the week on NDR Kultur, and received the following review by David Denton:

“…my usual reluctance to accept such adaptations has here been swept away. Not that this Horn Trio is a poor man’s version, but a work for solo piano that can very well stand on its own two feet. It certainly is not for well-meaning amateurs, the demands made on the soloist are extensive, particularly so in the scherzo, and one person hearing the disc commented ‘is this a piano duo’ as Christopher Williams’s hands were flying around the keyboard. Williams, who spends most of his time as an accompanist in Wales, is outstanding throughout, both works here receiving their World Premiere Recording.”